Just like auto insurance companies, it is pertinent for trucking companies to thoroughly look into a person’s driving record when hiring drivers. This is one lesson a trucking company in Victoria, Texas learned recently. A year after a serious road accident caused by the trucking company’s driver, who was reported to be driving while intoxicated, the business was ordered to pay a settlement of $9.5 million by a Victoria District Court. END_OF_DOCUMENT_TOKEN_TO_BE_REPLACED

It is every employer’s responsibility to screen applicants for criminal records and history of unsavory behavior. After all, one must exercise due diligence to ensure the safety of existing personnel. However, there is a thing called overstepping the bounds of privacy.

Given the wave of crimes against children in school within the past several years, recent efforts in Delaware to curb and prevent these incidents are nothing short of timely. NewsWorks reporter Nichelle Polston reports on the formation of the multidisciplinary Delaware Criminal Background and Child Protection Registry Checks Task Force. It seeks to further strengthen the state’s existing background check systems, specifically for adults who come in close (and often unsupervised) contact with children.

What the Applicant Won’t Tell You!

What the Applicant Won’t Tell You!

Entering 2014, the business environment continues to have legitimate human resource concerns with identity theft, false claims from employees, workplace violence and prevention, workers compensation or health insurance fraud, theft of services or company secrets, drug use in the workplace and other occupational fraud and abuse issues.

Why Do Employee Background Checks?

Business owners, along with their Security and Human Resource professionals, must consider pre-employment screening as the initial and essential standard in the hiring process to counter these issues.  One must act on this policy statement and implement the process throughout the entire workforce, including with all the Vendor relationships too.

From an objective standpoint, businesses that fail to screen, or those that inadequately screen job candidates (and service vendors), in advance of the job offer, expose themselves to the potential pitfalls noted above and a litany of other legal problems related to workplace safety issues and negligent hiring.  It’s better to take as much action as possible, at the pre-employment stage, and find enhanced value with this budget item.

One can easily understand how these hiring problems will undermine and chip away the integrity of your workplace, even if the most stringent hiring or loss prevention program exists.  Our firm can help you, and your staff, meet these many challenges today!

As your background screening “Vendor of Choice”, we will bring to bear over 28-years of nationwide background screening experience, professional know how with adverse or derogatory data, complete knowledge of public records nationwide, and an unblemished record of FCRA compliance.  Plus, we document our findings onsite at the source!

Affordable, fast and accurate pre-employment and employment background screening tasks will uncover information about the candidate that you need and want to know in advance of any problem or negative publicity.  Effective actions will help you to substantiate, verify, and corroborate all the relevant data listed on the Application, the Resume, and with the interview findings.  After all, how else would you know that the applicant standing in front of you, for employment, is really the person they say they are…?  We will help you make that critical judgment with objective, reliable and vital background screening information about your candidate, or service provider.

Remember, What the Applicant Won’t Tell You, We Will…!

In an effort to promote fairness for individuals who have been hit by the 2008 financial crises, or who have otherwise committed “irrelevant” past mistakes that have left them with a bad credit score, Senator Elizabeth Warren recently proposed a federal bill intended to ban credit checks for employment background screening purposes.

The Washington Times reported on the proposal on December 17 and published this quote from the Senator Warren:

“This law is about basic fairness — let people compete on the merits, not on whether they already have enough money to pay all their bills,” Warren said. “A bad credit rating is far more often the result of unexpected medical costs, unemployment, economic downturns, or other bad breaks, than it is a reflection on an individual’s character or abilities.”

This proposed Senate bill, titled the “Equal Employment for All Act”, is designed to alter the Fair Credit Reporting Act. It effectively prohibits employers from checking candidates’ financial histories to provide the basis for deciding whether they should be hired or not.

Following the recent 2008 to present financial collapse, Fair Isaac corporation reports that the FICO scores for about 70 million Americans have subprime credit scores below 650. It is for this reason that the bill is gathering support on both sides of the political fence; An effort to help job applicants with low credit scores, but good resumes, from facing hiring discrimination for that reason.

It should be noted, however, that this bill isn’t the first time similar legislation has been raised at any level of government. In fact, at the state level we have such legislation in California, Colorado, Hawaii, Connecticut, Maryland, Illinois, Washington, Vermont, Oregon, and Nevada, as each state has already passed similar legislation over the past several years.

In a country where the majority of the workforce has been affected by the financial crisis, a bad credit report may no longer be considered as a valid basis for a company not to hire competent applicants, with this proposed law. Therefore, companies should take great care in making sure that their assessments of a person’s qualifications draw more heavily on aspects that the prospective employee has more control over than their credit score or the content of the report.

To ensure hiring practices remain in compliance with all local, state, or federal legislation, companies are recommended to consult with reputable employment background screening service providers like “The Accu-Facts Company”. With such providers regularly on the watch for developments that may affect the hiring landscape, for employers, companies can trust that the validated background screening information they’ll receive is current and reliable, notwithstanding the current debate on the use of credit profile reports, for employment.

The Cold Truth: The Importance of Conducting a Public Records Search

The recent mass shooting that took place right inside the headquarters of the Naval Sea Systems Command (NAVSEA), in Washington, DC showed the value of screening employees thoroughly, before hiring them in your company too. The gunman, Aaron Alexis, killed 12 people and injured three others, an untoward incident that may have been avoided if only his employer had been more vigilant from the start and through the several incidents that occurred prior to this horrible event. An article posted on CBSNews.com discusses how the NAVSEA will handle this situation:

“The shooting also raised questions about the adequacy of background checks for government contractors who have access to sensitive information. Defense Secretary Chuck Hagel has also ordered two sweeping reviews of military security and employee background screening programs, acknowledging Wednesday that “a lot of red flags” may have been missed in the background of the Washington Navy Yard shooter”.

“Obviously, there were a lot of red flags,” Hagel told reporters at a Pentagon briefing. “Why they didn’t get picked up, why they didn’t get incorporated into the clearance process, what he was doing — those are all legitimate questions that we’re going to be dealing with”, as the investigation continues.

The illustrated article from CBS News should serve as a reminder for businesses in all industries, particularly when it comes to hiring new employees. One of the most crucial steps of finding out the truth about the people applying for a position in your company is through a comprehensive public records search, but also verifying as much personal, non-public data as possible, in advance.

Although employment background screening tasks can easily be done through the many different companies who offer these services, it is important to note that not all of them are the same. There is still the need to find the best company who will conduct the search for validated information in a comprehensive and systematic manner. Look for an experienced company who will search public records, as well as non-public agency records, and perform a stringent screening of the information gathered to ensure its veracity. This means onsite research at the source with authentic records.

Further, it is also advisable for firms to engage a company who conducts FCRA compliant background screening checks, with a credible record of performance. “The Accu-Facts Company”, for example, employs these methods for clients who want to make sure that they are hiring the right people and that they meet FCRA compliance, and other guidelines, on every job. At the end of the day, business owners who are serious in attaining growth and success, for their firm, should never shortchange their hiring process, nor the safety of their employees and the integrity of their workplace.

Developed information about this incident today, shows the IT Contractor “sought medical treatment at two different VA hospitals prior to this shooting, for insomnia, but also that Alexis claimed in a third incident that “he was hearing voices and feeling vibrations sent through his hotel room walls”, as reported by Newport, Rhode Island police. Alexis was contracting at the Newport navy base prior and before the assignment in the D. C. Navy Yard facility. Obviously, all these circumstances are each subsequent to the original background screening assignment, as is reported today.

Weeding the Wheat from the Chaff with Employment Background Screening

Every company wants employees who have the right combination of skills and smarts to accomplish whatever tasks are required of them. However, there’s more than meets the eye, so they say. Forbes contributor Mikal Bellicove explains:

Underlining your Right to Know with a Thorough Public Records Search

Knowing what other people know about your personal life is unfortunately not as easy as it should be. Although you may feel that you have a right to know how privy other people are of your personal circumstances, government agencies do not necessarily agree. A USA Today story by Yamiche Alcindor illustrates the problem on a nationwide scale: 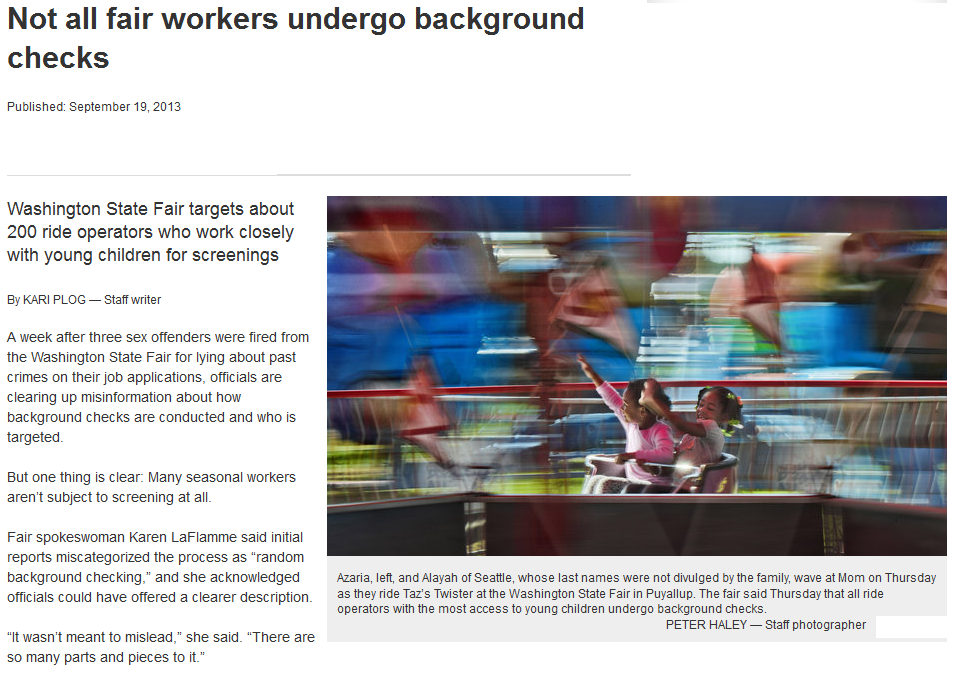 The News Tribune website has a revealing article that states that not all employees working for fairgrounds are screened properly before being hired. This fact is particularly surprising because these locations attract kids of all ages and it can be worrisome if a dangerous sexual predator manages to secure a job in such a place. The article, which closely follows the Washington State Fair, noted the danger that sex offenders pose and how a poor background screening system can jeopardize unsuspecting parents, children and other patrons to the fairs:

“Sex offenders hired for fair jobs dealing with children isn’t a new problem, Engle said. About three to five sex offenders on average are fired from the fair each year for falsifying information on their applications.

Scott Engle, a Puyallup police spokesman said there’s no perfect way to pinpoint offenders, but the best practice is screening anyone who’s in close contact with children. END_OF_DOCUMENT_TOKEN_TO_BE_REPLACED