As an employer, one of the first things you look at in an Applicant’s resume and submitted paperwork is the school where he or she graduated. When you see a degree issued and conferred from Harvard, Yale, Princeton, or Columbia universities, for example, your interest in this candidate will most likely be piqued. Ivy League graduates demand and get your attention very quickly, in the hiring phase.

Imagine the surprise of a prestigious South Korean university when they discovered that one of their professors does not actually hold an Ivy League graduate degree despite claiming to do so: 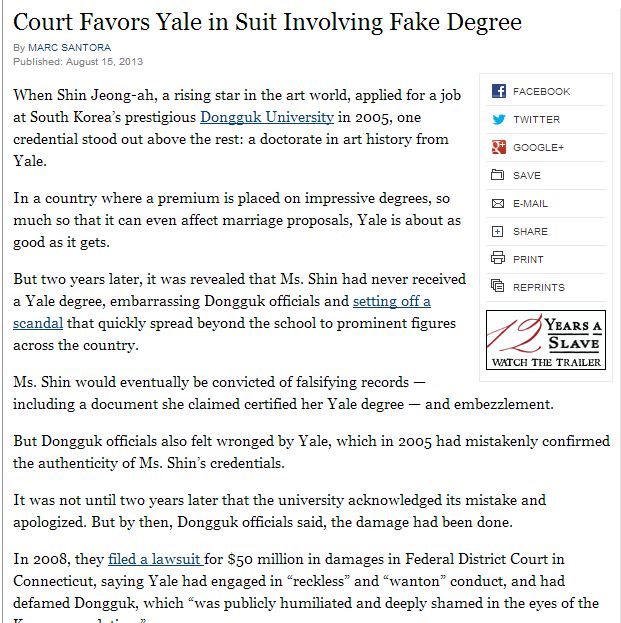 Dongguk University filed a civil suit against Yale, but the courts sided against the university, citing that there was “no malicious intent” in the oversight, by the school. This one person incident has proven expensive for the Korean school, losing millions that would have been used instead for expansion. More importantly, the administration at Dongguk experienced extreme, untold embarrassment and lost prestige, in front of its clients, the students, the local community, and around the country too.

It’s not just high level professor positions, however, who have been found to falsify documents. Last month I discussed similar circumstances for Scott Thompson, the Yahoo CEO that stepped down when it was also discovered that he did not hold the computer science degree his resume claimed. These events show that even top executives and other high standing professionals should probably undergo the same careful employment background screening as lower level employees too.

Pre-employment background screening is important because applicants should have the necessary educational credentials and skills for the job they’re applying for. Moreover, any job that involves access to confidential data, or access to huge budgets, should be given special scrutiny, in the screening phase of the hiring process. Because of the need to mitigate every hiring risk and find falsehoods or deception, an employer should contact a reliable employment screening service, like “The Accu-Facts Company”, to weed out false resumes and other deception from applicants. Avoiding the pitfalls that could damage your brand, your business, or your workplace environment is the paramount goal of your initial background screening efforts.